The Kingdom of Bhutan, the Land of the Thunder Dragon, was thought to be the infamous Shangra-la by the western world through the 20th century. This mysterious mountain abode is tucked high in the Himalaya and is wedged between two of the world's superpowers: China and India. Bhutan is tiny - a mere 300km wide with a population of 800,000. And yet it has a brand appeal like no other country. Most famous is the 'face of Bhutan' the Taksang (Tiger's Nest) Monastery perched precariously to the side of a vertiginous cliff face where it is said that Guru Rinpoche landed in the 8th century while flying on the back of Tiger. 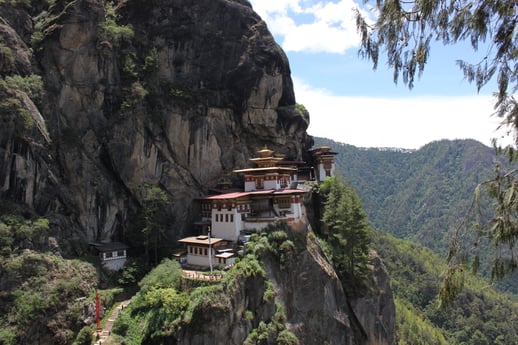 Like any nation, Bhutan faces challenges. Gerry Daly, the fast-spoken, profound Irishman who is the Resident Coordinator of the UN, describes the changes to Bhutan over the past few decades as more than just rapid change, instead calling it a "radical revolution" that is having a profound social impact.

It all started with the Wangchuck dynasty which reunified Bhutan in 1907 and brought a century of stability and benevolent leadership. Through the decades the monarchy showed genuine care for their people and toured throughout the country - usually on foot or horseback - to meet people in their homes and understand their challenges. The Fourth King of Bhutan, His Majesty King Jigme Singye Wangchuck, was truly visionary. He foresaw the rise to power of India and China and recognised the fragile geopolitical situation Bhutan was in. He also had the foresight to realise that Bhutan could not remain hidden from the rest of the world for ever. The modernisation machine was inevitable.

So the Fourth King did what very few have done. He relinquished the running of Bhutan to a government, thereby establishing the youngest democracy in the world. He built international awareness (and allies) of Bhutan to protect its sovereignty, and famously said that the pursuit of Gross National Happiness (GNH) is more important than Gross Domestic Product. This became the blueprint for controlled modernisation. Oh, and he then abdicated the throne to his son who is as much loved by the general populace as his father.

This (very) brief history brings us to the challenging position that Bhutan finds itself in. The monarchy, while highly loved (the general population did not want a democracy) are removed from the day-to-day operations of the Government. In three elections, three different parties have come to power and they are struggling to find an operating rhythm that may still take many years.

Against this backdrop is a rapidly urbanising society with expectations of work that far exceeds what is available. It is through these cracks that the most vulnerable may fall. To address these needs Civil Society Organisations (CSO) have arisen - we'd call them NGO's or NFP's - and have an important role to play in the future development of a strong and stable society. The government and Monarchy alone can't do everything so each sector has a role to play in this critical tripartite relationship. The democratic and social transition has been monitored carefully by the United Nations. Through the provision of expertise, resources and coordination of international aid they have provided a development focus for the country. In particular they recognise the vital work of the "third sector" and it is through this focus that brought me to Bhutan.

18 months ago the Australian Himalayan Foundation, under the leadership of Carolyn Hamer-Smith, was delivering capacity building training for their local delivery partner organisation. Through conversations with Gerry Daly at the UN, he asked if it could be broadened to others in the sector with the UN coming onboard as a partner. The first workshop  was co-ordinated by Carolyn in her role as CEO of the Australian Himalayan Foundation and she was joined by fundraising expert, Maree Whybourne for the second workshop. They were very well received, and a third workshop was instigated to include expanded topics on strategy, leadership and teamwork.  Helvetas and The Bhutan Foundation joined the UN as partners. 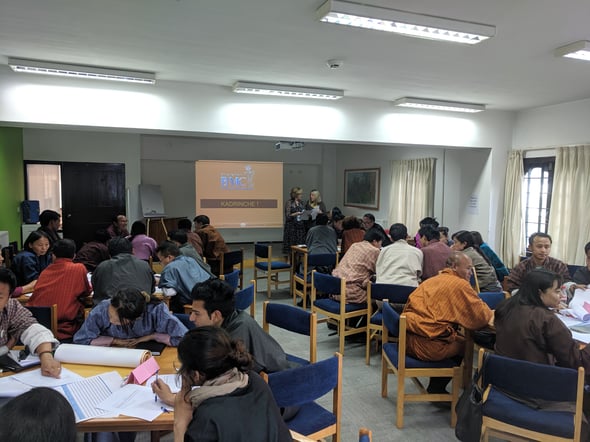 The turnout was above expectations. We expected 25 people to attend and instead had 45 people including 15 Executive Directors (CEOs) participate. Considering the entire sector has only 55 registered organisations, this was a great outcome. While many came from the main towns of Thimpu and Paro others came from further away, including 3 people from a farming cooperative that took 12 hours by bus to get to Thimpu, the capital.

We designed the two-day workshop to be as practical as possible. Each day started with a plenary session followed by specific topics for the Executive Directors and upskilling for the managers. We noticed that some organisations were making significant impacts and we therefore structured the workshops to be as participative as possible to allow opportunity for the wisdom in the room to emerge and be shared. These dialogues resulted in some major learning opportunities for the participants. Moreover, we partnered with local trainers to provide expertise on topics such as finance and marketing communications.

The future is bright for Bhutan. The CSO sector is like a microcosm of modern Bhutan. Young, small, energetic, kind and desperately trying to retain their unique culture. These training workshops play a small, but important, part of developing the CSO sector. We hope that those who attended benefited from hearing different ideas and practical strategies from running NGO's in other countries.

However, I believe it is the western world that stands to learn far more from the Bhutanese worldview. A worldview that sees time not as a resource to be ‘used’ but rather to be enjoyed; that giving is better than receiving; and that each human is kind (unless proved otherwise). There is much more to explore but I’ll save this for future articles.

Read the article in the Bhutan Broadcasting Service about the training: http://www.bbs.bt/news/?p=116339

Find out how our professionals can help you

Find out how our professionals can help you

To stay updated on our latest news and program offerings, enter your details here

Design by Five by Five